Seven decades on, the memories of the partition of India and Pakistan are still strong. Memories of Partition brought the voices of silent experiences, stories and hidden histories of Manchester’s South Asian communities to the stage in 10 monologues from some of the North’s most exciting playwrights.

Ten South Asian writers and spoken word artists were commissioned by the Royal Exchange Theatre to create new monologues which revealed the untold stories of the significance of Partition and the impact still felt today. These monologues were inspired by the material that has emerged from the Memories of Partition Oral History project at Manchester Museum. The pieces were directed by up and coming Manchester based directors.

I directed two pieces (see below), both of which were performed in the Royal Exchange Great Hall and main house, as well as in the following community venues across Greater Manchester: Manchester Museum, Indian Senior Citizens Centre, Longsight Library and Learning Centre, The Welcome Centre and Abraham Moss Community School.

All photographs © Lucija Klarik for The Royal Exchange

part it, part not

Written by Afshan D’souza-Lodhi and performed by Shakera Louise Ahad, part it, part not focused on the experiences of a young, British, muslim woman, who has inherited a halal butcher’s shop due to her husband’s death and whose dual parentage, part Indian, part Pakistani creates a complex identity to negotiate and practical barriers to movement at seemingly every turn. 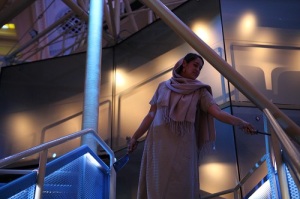 Written by Ravi Thornton and performed by Jennifer Kay, iDENT is an interactive piece in which audience participation explores the possible outcomes of a future in which the A.I. are in control. The last remaining humans are forced to choose which pack they will be loyal to. Will genetic inheritance force this loyalty or are there other, stronger bonds? 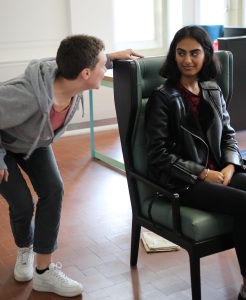